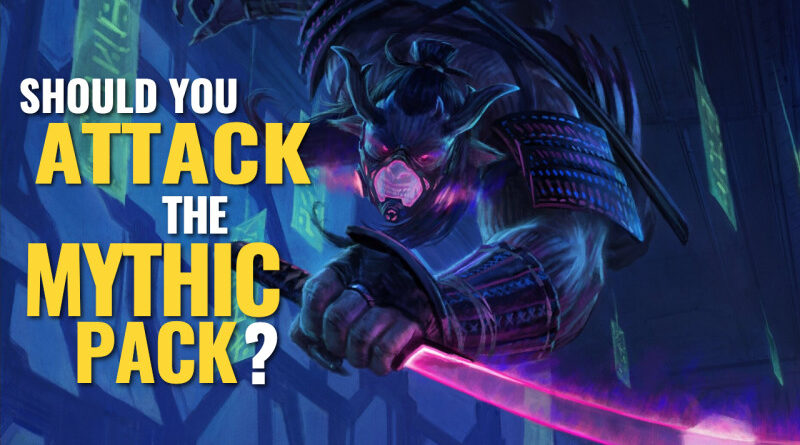 Back in April 2022, a new kind of booster pack showed up on the MTG Arena store. Some thought it was an April Fool’s joke, where you’d get a bunch of Common cards inside the rather pricey “Mythic” pack as a way to troll all the Magic players around the world in one swift stroke of the blade.

As it turns out, the Mythic Pack is actually a new kind of booster pack, originally starting from Kamigawa: Neon Dynasty, but is now available for all sets past and present.

In terms of contents, a Mythic pack still gets 2 Uncommon and 5 Common cards, however the Rare slot has been replaced with a guaranteed Mythic Rare, or wildcard of Rare or Mythic Rare level. Many players are likely aware but the regular pack also has the capability of pulling the same Mythic Rares and wildcards, just that the odds are considerably lower.

Here’s an example of a Mythic pack from Kamigawa: Neon Dynasty:

It always feels good to open a Mythic Rare from a pack, but having received The Kami War and paying 30% more, is it actually worth it?

To further understand value, we need to know what are the best pulls possible from these Mythic Packs. Will these cards will be useful to the player in the long run? Unfortunately, there are great Mythics and then there are poor ones that will almost never see play.

Out of 18 Mythic Rares, only 7 have a score above 5, which means it’s unlikely you’ll use them a lot in Standard. Over time, as the meta changes, some of these cards could start seeing play in Historic, the broader and more evergreen format on Arena. The Wandering Emperor has slowly turned out to be a powerhouse in almost any deck that plays white, from mono-white Weenie decks to blue-white control decks.

Unfortunately, the other Planeswalkers Kaito Shizuki and Tezerret, Betrayer of Flesh are very specialised characters for Ninja/Rogue and Artifact decks respectively, neither of which are strong contenders in the current Standard meta. Of the 5 Mythic dragons, Junji, the Midnight Sky and Ao, the Dawn Sky have fairly good death triggers for multiple decks, but the others are still finding their place.

Looking back, Kamigawa was a great set, filled with strong Rares and Mythic Rares, making Mythic Packs a sensible choice. But is it the same for all sets from now on? Let’s take a closer look at the Mythic Rares from the recent Dominaria United and rank them again based on a 1 to 10 scale (10 being absolutely useful in majority of decks):

Remember we’re looking through the lens of Arena, and while some of these Mythic Rares have good applications in Commander, these ratings are based on how viable they will be in Standard, Explorer and Historic. Sheoldred, the Apocalypse and Liliana of the Veil have excellent usability as mono black control pieces, but most other Mythic Rares fall short and hardly see play.

Of the 20 Mythic Rares in Dominaria United, 7 received a score above 5, which makes the value of a Mythic Pack a little lower than in Kamigawa.

When Should You Open a Mythic Pack?

Completing Your Collection of Mythic Rares

For certain players who like to see 100% completion in their Arena collection stats, Mythic Rares are often the final hurdle. Understandably, they are harder to pull from regular packs, and a significant challenge to complete a playset of 4 copies for each Mythic Rare.

To build a full collection of a set, first get regular packs (or use the Drafting method) to build up your collection as much as possible. Once you’ve maxed out on Rares, that’s when you hit the Mythic packs to round off the collection. This works because packs on Arena are weighted to give you cards that you don’t already have a playset of.

You have about a 1 in 18 chance (5.6%) of opening The Wandering Emperor from a Mythic pack, which doesn’t sound like much, but the odds are much lower with a regular booster pack since there are 57 Rares in the set that would be added into the card pool.

Is the Mythic pack worth it? We would say yes, as long as you fancy and can utilise the Mythic Rares from that particular set. Do a personal ranking of the Mythic Rares in the set, if it’s a 6 and above, then it’s worth getting, even at 30% more cost. After all, you’ll need to get more than 30% more regular booster packs just to have the same chance of getting a Mythic Rare. Magic Basics: Pioneer Format for a New Generation of Players